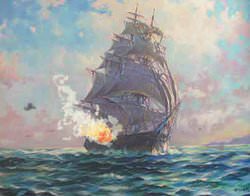 Sinking of the Selune's Light (Randy photoshopped in the smoke and fire.)

Lukas: Ok, I'm glad the caster on the carpet didn't keep attacking us. Not glad about the water elementals that whoever that was sent after us. The crewmen and passengers in the water and one of the boats were slaughtered.

Fortunately, the Water Elementals were dumb enough to stay lined up so I could hit them both with the Wand of Lightning Bolt. The wand might not have been much use against drow and chain devils but it's proved it's worth against other enemies.

We did manage to survive the battle but one of the strangest things happened during the combat. A storm passed overhead, lightning struck the water and left a naked man with a falchion in the water near one of the lifeboats. He helped with rescuing one of the crewmen.

And the guy has amnesia out the wazoo. Oy!

Robhim: That spyglass thing that Captain Jack lent me was amazing! I'd never used one before. I don't understand why my training as a scout-trailblazer with the temple soldiers didn't include one. Anyway, the figure on the flying carpet was smallish. It was dressed in a black birka, only its eyes were visible. I looked a lot like Ruha would, except I am fairly certain that Ruha couldn't cast lightning bolt. Actually, Harlann reaffirmed that later while interrogating us. It's not Ruha's style to use water elementals either. From what I saw on her pocket plane, her burnination would have taken the ship down much more quickly.

Oh well, we survived. Obviously Anhur intended for us to. Had we still been sailing, instead of floating in the waves, we would have missed his message. I do not yet understand why the Falcon of War would send to us an ill-equipped man with amnesia and no apparent combat skill. I have come to believe he may just have been sending me a gift in the form of a falchion, and the man was merely its floating package. Some divination and deep prayer might be in order. I would like to know more about the upcoming battles in Lone Rock City.

Lukas: Well, I suppose the good news is that we are alive. Poon (Or maybe Robhim) could cast create water and Robhim's ability to cast animal messenger came in handy again. It was pretty funny that Robhim had to catch and hold a seagull overnight so he could prepare animal messenger.

Mystery guy turned out to be a follower of Anhur, God of storms and vengeance. It is assumed that he is a sponteneous divine caster, as we found out thanks to Brennel. Seems like the same kind of magic that Timmie employed. It would be very wierd if he were a reincarnated Timmie. I just think that he'll be an asset to the party. Mysterious lightning arrival says ally you want, especially when he worships the same God as the druid in the party. He doesn't trust us very much though. Oh, yeah, I also gave him my fancy cloak and my older set of clothes. He needed them more than I.

We drifted for about five days before we were rescued. That wand of Silent Image was the perfect signal to get the rescue crew's attention.

Robhim: It does not feel right that I have to use animal messenger so often. We are finding ourselves in too many "emergency" situations where our judgement has become flawed under the strain of the moment and we've made too many mistakes. Some of these mistakes, especially Layna's communication, have been quite grave. Wood Shape proved to be quite useful with shoring up the raft. I should study its uses better. I've heard of an exceptionally useful arcane spell, "Fabricate". I wonder if one of my guild's first objectives should be to limit the use of that spell commercially? It could really damage the employability of stonemasons and carpenters. Although, I do need to consider more precicely who will be the members of the Contracted Workers Commission.

Blue seems to be unwilling to let us help him in any way other than to give him handouts. This is most unfortunate; especially when he continues this tradition after Faith Healing worked on him and proved his association with Anhur. This fact helps my theory that he was intended as a temporary vessel in this world to deliver to me a sign (if not the falchion he carries).

If what these big-headed, self-declared nobles around LRC are speaking the truth, about this Great War, I already know that The General of the Gods would be on the side of Good, with or without Horus Re's permission. I needed no sign for this. Anhur must be trying to tell me more.

I wonder who Lauren Whistlemoon, Captain Jack's friend in LRC, is.

Lukas: Rescued, clapped in irons, locked up for a day, berated and interrogated.

At least we weren't executed. Alicia, Harlann McInnis, Lance Brightfist (Cleric of Lathander.) and Cendrell all interrogated us using Mind Fog and Zone of Truth. Our ineptness was stretched out infront of us like the guts of one of Jones Henryson's victims.

We really, really need to work on a lot to have a chance of seeing old age. Harlann is especially pissed off about how Talen found out about Alyssa Dac'Angelo-Moonbringer. Harlann seems to have some kind of pathological distrust of Talen, going back to many years ago when they adventured together.

I ended up confessing a whole freaking shitload to everyone because Harlann pointed out my connection to Velsharoon. He doesn't seem to like Warlocks. I don't think I blame him too much but that doesn't mean that I have to like the guy that just told me I can't use my Warlock abilities on the island. I'm gonna have to invest in a goodly amount of scrolls and wands to make up for my lack of Eldritch Blasting capabilities.

The good news is that I may be able to seek out a new God beyond Meilikki or Velsharoon, no offense to Meilikki and hopefully keep my warlock powers by atoning for my acceptance of Velsharoon's offer.

Getting Flame Striked hurts! And it doesn't help that the spell indicated I wasn't good. Something is rotten in Waterdeep.

Now we've got to move on to getting information about Asper from Verbag. The Mystery guy is coming with us because he's got nowhere else to go. I guess We'll have to pool resources to get him some equipment, he at least needs armor and supplies.

Robhim: I wonder how Harlann and company pressed Lance into their service. It is quite unlike any follower of the Morning Lord to be unforgiving and not to change his plans to fit the situation.

Well, every knows everything now. Perhaps they'll stop quibbling over us, and maybe each other. None of these conniving elves can give any reason other than "gut feeling" (And that he's canny. Last I knew, being shrewd and having caution was a good thing.) as to why they should want Talen's succession to fail. It feels to me that they just want a pet half-elf on the throne. Talen has worked hard to assuage the court and to earn their favor to be placed under the crown. These elves, on the other hand, don't do anything for themselves: they send us to fetch a girl (when they could have just teleported a couple times), they sit at home and drink and frollick, they consort with the scarriest man I've met (Jones), and they seemingly pressed Lance to do their bidding to interrogate us.

And they made Lukas a virtual eunoch by forbidding him to use his powers in LRC.

DM note: The flame strike did not hurt Wolfdale. Delirium was wounded to the same degree that Lukas and Robhim were.

Island in the Sea (Lone Rock)

There are a series of messages waiting for the party at Stouts Inn. And a list of some messages on the message board. Captain Jack is very depressed about his ship's misfortune and has become something of a bellicose-drunkard.

Package to the attention of Lukas, Wolfdale, or Timmie

Stout has been holding a package addressed to Lukas, Wolfdale, or Timmie that bears the official seal of the Halls of the Even-Handed. Inside is a letter, each addressed to Lukas, Wolfdale, Timmie, Robhim, Brennel, and Abendago. Each letter reads: Dearest sir or madam, Consider this notice of the criminal trial of the death of Neral Taylor in the month of Kythorn (June). Your attendance is mandatory. The date listed for the trial is well after Shieldmeet.

Lukas: Neral Taylor, Neral Taylor. Who is Neral Taylor? I get the feeling that I should know. I don't think that it is the halfling cleric of Velsharoon. His name was Tolman something. It might have something to do with the fireball incident at Stout's Inn I'll have to look in to this. This is probably not a good thing.

Lukas: No, he was Timmie Thomas, Ilmater rest his soul.

Robhim: Oops, yeah. (Psst, I think Delerium's delerium is rubbing off on us.) OOC: It's probaby the guy who did the torching of Stouts. I have a name that looks like Norel.