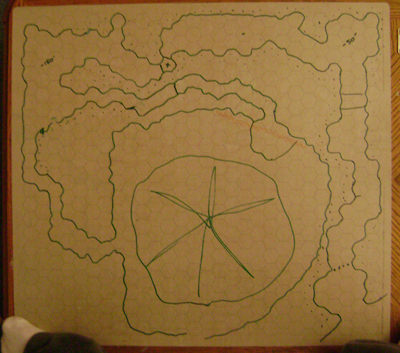 Annals of the Knight of the Morning Breeze Chapter IV Section ii, as recorded by Rhymin’ Simon Harpell

Our adventurers fought through gloom and doom, where a great pinnacle of magic once did loom. Our hero Simon met his last, done in by a fiery blast. Wolfdale reached his body and fell into dismay. He fell to his knees and to his god he did pray. When silvery light fell upon his head, Simon arose, no longer dead.

The earlier blast of light signaled high, filling the entire morning sky. Netsuo Nishi was the first to show, his kobald ninjas in tow. He brought concern and a sense of worry, hence why he arrived in such a hurry.

To a library the group was led, guarded by a golem lifted overhead. Many books adorned the ancient room, with more knowledge than one could hope to consume. The party had no time to explore, for there were more guest upon the library door.

Alyssa Dac'Angelo and Alicia Humphrey come with a contingent force, making great haste to the great lights source. A familiar face was brought with the two, Cadearo Dominus whose presence was long overdue. A man name Wes Temple was also there to give his aid, for through actions of Levistus he was betrayed.

Orders were left to guard the Muir Hole, and various watchmen were left in their control. Simon left with the two women back to town, fearing a life of great renown. He said he wished to focus on his studies and fatherhood, though his great fear of death was what was understood. Grim Greycastle stayed behind in Simons place, armed with spells and a wicked mace.

Dark forces came before the next mornings light, bringing with them a fierce fight. Fortifications helped keep the creatures at bay, though it only proved to be a temporary delay. Tieflings broke through the blockaded path, aided by invisibility and a triceratops’ wrath.

Battlements held through the night, and our great heroes triumphed through the fight. Few loses were had by the winning side, through sadness was felt for those who died. Not all the villains they faced were slain, for the knight teleported away with something arcane.

Morning came with Netsuo’s return and a promise of skill for those with a desire to learn. Week of training would come and go, and great skill with Panther Stance the group was able to show.

With their training complete, the group decided to make their retreat. To Lone Rock City was where they tread, where a greater adventure would lie ahead.