Liston debriefed the watch members and got pissed at them for not noticing details.

Discussion with the Prime Minister

Lukas: So the rescue party went ahead to save Alyssa (I still believe she's alive.) and the Prime Minister stayed behind. He conjured up a fantastic mansion for us to stay in, then sat down with us to talk. I wonder if there is a secret we managed to keep from the Prime Minister. We probably revealed most of them. Oh, wait, there's that one but I can't mention that!! I hope I don't regret bringing up Tio Meadmaker.

We also got paid a thousand gold to get information from Vurbag Deathbreaker, whom Prime Minister Talen arranged a jailbreak for with the intent of using him for information on the Liberators next move. All we have to do is say "The dragon watches you" and he'll write all the info down or at least spill his guts about Asper. Crapdammit, I forgot that Asper was involved with Fyodor.

Poon: Don't forget that Talen had a cleric with him, Evan Stormhandle. He offered to heal any of us that needed it but I had already taken care of it, thank you very much.

Walking past Telella's more-opulent-than-most domicile*, the party saw no ribbon as a sign that she was approached by people about the heir to the throne. *The Moonbringer family is one of the ruling classes in Tangled Trees

Ambush in the forest 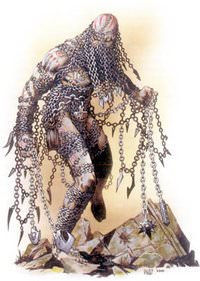 During an otherwise peaceful night, the party was caught half-asleep and groggy by a chained humanoid beast. Just shaken from sleep, they scrambled for their weapons and defended themselves.
The chained creature was resistant to most conventional attacks, and sported spell resistance to boot, foiling many attempts by Lukas to blast him a new one, and limiting the options of Robhim and Poon. Seeing the horrific menace, Poon and Brennel drew silver out to match their evil foe. Discovering its weakness, Robhim quickly followed suit, and before long it fell. The party tended to what wounds it could that night before retiring again.

Lukas: Y'know what? There are a lot of enemies I'm learning to loath. Drow, Liberators, Chain Covered Humanoid Freaks. That last one is a real pain in my ass! The majority of my eldritch blasts hit but did nothing!!! We were pretty lucky it wasn't very smart, otherwise it could have killed more than one of us. And I'm very glad I got to fell it, even if the others killed it once it had fallen. I'll have to look into techniques that can bypass the anti-arcane defenses that thing had. They are going to be a major pain if I can't find a way past them.

Poon: I lost a bunch of silver arrows firing at that son-of-a-bitch! Is that something I can be reimbursed for out of the slush fund?

Robhim: Right after Anhur reveals to me I can be granted some certain great stormy spells, the perfect opportunity to have used them comes along, and I didn't have them prepared. I should have seen knowledge of them as a sign! If our lifeboats survive this, I must commune.

Lukas: Cripes, I knew trouble would come from Poon's little plan to raid an ornate chest in the Selune's Light's hold. I just hadn't figured it would come from outside of the ship!! A wizard or sorcerer was firing Delayed blast fireball at the ship. DELAYED BLAST FIREBALL AND I DIDN"T JUST RUN!?!??!?! I TRIED TO SHOWBOAT BY SHOOTING DOWN ONE OF THE FIREBALL BEADS?!?!?!??! I don't know what I was thinking. Maybe some suicidally good part of me came out back there. Either that, or I was doing it for bragging rights.

As it is, the crew and passengers aboard the Selune's light, including my friends and I, are stranded in lifeboats. In the middle of the sea. With at least one enemy within striking distance of the lifeboats. And the big, ornate chest is at the bottom of the sea by now.

I've been in worse situations before. I'm sure we'll manage.